Before episode: Oohohooh I added too much jam to this dream and now I'm stuck...

After episode: It's right behind me, isn't it? 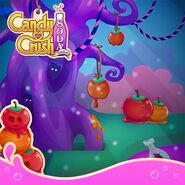 After the release poster
Add a photo to this gallery

Retrieved from "https://candycrushsoda.fandom.com/wiki/Wobbly_Woods?oldid=218281"
Community content is available under CC-BY-SA unless otherwise noted.