This is the final episode of Flash version.

Before episode: Uuugh I'm ALIVE! Just kidding, I already was.

After episode: ...one hand was stretched out, seemingly to give me candy! Tasty! 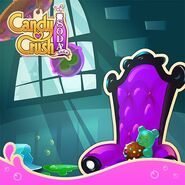