Before episode: Edible evidence is my favorite kind! 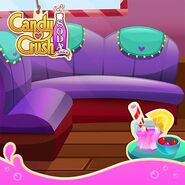