Soda levels (sometimes also known as Pop the bottles levels) are one of the seven level types in Candy Crush Soda Saga, along with frosting levels, bubble levels, chocolate levels, honey levels, bubble gum levels and jam levels. Soda levels are the first level type introduced in the game. They first appear in episode 1, Candy Town, with the first level being level 1.

To win a soda level, the player has to pop a certain number of bottles, to raise the level of soda to the top of the board.

When all bottles have collected, if there are any more bottles on the board, they will also be collected and Soda Crush is activated - fish, striped and wrapped candies are made for every move remaining, giving 3,000 points for each. Then each of them activates themselves.

Soda levels are usually easier than other levels and easier if there are few colors. However, if bottles are inside blockers, they are very hard to pop.

Some soda levels are harder because they have bottle dispensers, which means the player has to destroy the blockers that are below them before they can pop them bottles.

Quenching the thirst? : Why add more soda? The world is already drenched in it!
Pop a bottle (1337 times) 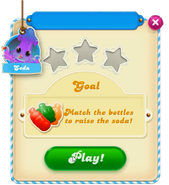 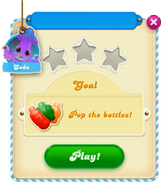