Soda (or Soda level) is a main element in Candy Crush Soda Saga. It was introduced in level 1 along with the soda levels. It only exists in soda levels and bubble levels and appears in all of those levels. Their sea level can be raised by popping soda bottles, a feature that is very important in most levels. Any candies drop or rise toward to the sea level of soda.

Green Soda is the 2nd type of soda, which is introduced in the 25th episode, Carrot Cake Cubby, at level 346. Any match made in the soda or activation of special candies in the green soda can produce a fish in the squares with candies affected. The combinations in the green soda do not produce any fish unless they're involved in the activation of special candies.

Candy fish is still be produced when the player uses a striped lollipop hammer to make a blast or free switch to match candies, but this is not applied with lollipop hammer.

Orange Soda is the 3rd type of soda which is introduced in the 37th episode, Spun Sugar Carnival, at level 526. After each move, every blocker in the soda including jelly cakes will be decreased by one layer (except

This is not performed when the player uses a free switch to match candies. 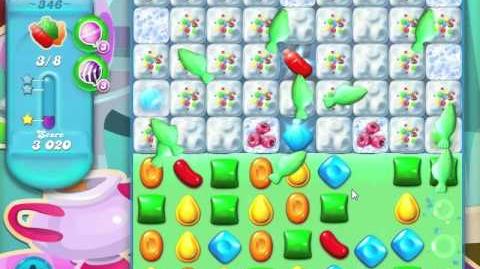