Rainbow Road is an event in Candy Crush Soda Saga that is available on mobile devices and Facebook.

While the event originally, and currently has no time limit, for a limited time, you originally had a time limit of 24 hours, this was removed in August 2019 update.

Get sweet boosts and new gear for Kimmy when you pass new levels without losing a life!

When the player completes a level, Kimmy will appear on the map with a rainbow on the levels they pass. Complete as many levels without losing a life as possible, you can get more treats. However, it you fail (include the players click quit button), you will lose the boosters in current level and come back the previous boosters given. 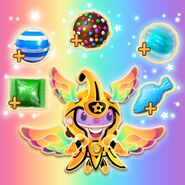 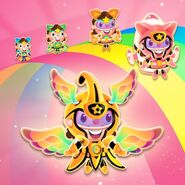 They say there's a treasure by the end of the rainbow... Find out! Join our new event, Kimmy's Rainbow Road! 🌈 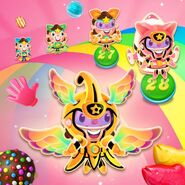 Kimmy's Rainbow Road! 🌈 They say there's treasure at the end of the rainbow... Find out!
Add a photo to this gallery

Rainbow Road info 2
Add a photo to this gallery

Start the level with boosters given

Are you sure?
Add a photo to this gallery

Sunrise Bow
Add a photo to this gallery
Retrieved from "https://candycrushsoda.fandom.com/wiki/Rainbow_Road?oldid=230882"
Community content is available under CC-BY-SA unless otherwise noted.