Before episode: Mom and dad say it takes time, but I can't wait 'til I grow more arms!

After episode: Don't worry about us. We don't block that much on our spare time. 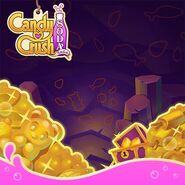