Before episode: Keeper of balance, search for the salt with a sweet heart.

After episode: When you're swimming in soda, let the bubbles carry you. 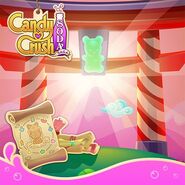