Kimmy (aka Kimmie), a 10-year-old girl who sets out in the soda world to find her sister, Tiffi (or Toffette), is the main protagonist in Candy Crush Soda Saga. As she ventures this route, she discovers what's out in the open world and meets new characters, who share the world from their perspective.

When the player successfully beats a level, Kimmy appears jolly. However, she will cry if the player fails a level.

Kimmy has similar features to Tiffi, however, they are not identical to hers. Instead, Kimmy wears a sky-blue dress along with pairing blue shoes, and has brunette hair tied with a red bow. Pink rosy cheeks are seen on her complexion as well as a nose similar to Tiffi's. Unlike Tiffi, her expressions aren't as exaggerated.

On Hard Levels, she wears a ninja clothing holding a fan which bears the Hard Level Skull on her right hand.

On Super Hard Levels, she wears a samurai outfit holding candy cane swords in both hands. These items can be seen in Dunking Dojo.

On Ultra Hard Levels, she wears sensei clothes with a white beard, and therefore can easily be confused with a man, as females do not have beards.

Originally from the Candy World, the soda world was eventually mixed and transformed into a Soda world. She's a 10-year-old girl who discovers where her sister has wandered off to... Have you seen Tiffi lately (besides the Candy World?) 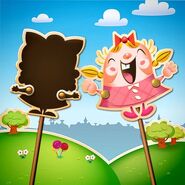 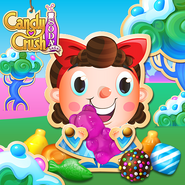 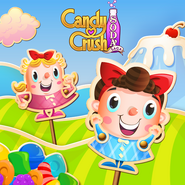 Above the river (Frosting Forest) 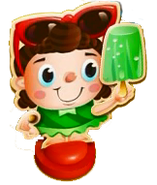 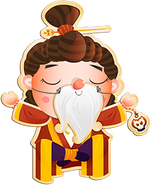