Before episode: I'd explore every part of the world just to find my way to him...

After episode: Oh, my love! We'll go on adventures together forever! 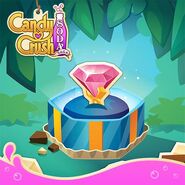