Jam levels are the second most common level type in the game, making up 12.54% of all levels, with 735 total appearances out of the 5860 levels.

To win a jam level, the player has to spread jam everywhere. Apart from finding bears and removing chocolate, bubble gum and soda bottles, the jam must be spread over the entire board. Jam can be spread by matching candies which are on the existing jam. This is why jam levels are sometimes very difficult.

When all amount of jams are spread, Soda Crush is activated - fish, striped and wrapped candies are made for every move remaining, giving 3,000 points for each. Then each of them activates themselves.

Jam levels are often hard if the player does not know how jam works. The levels are usually easy if there are no blockers and few colors but this can become a disaster if there are many colors and you do not remove all blockers to spread the jam on the board. 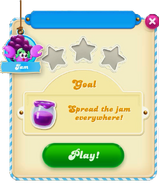 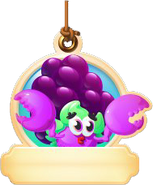 Jam
Add a photo to this gallery

Instruction 4
Add a photo to this gallery
Retrieved from "https://candycrushsoda.fandom.com/wiki/Jam_levels?oldid=231258"
Community content is available under CC-BY-SA unless otherwise noted.