Jam is the main element of Jam Levels. You are required to spread it all over the field. You can pass the level easier if you understand some unique properties of jam. (see below) 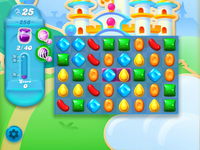 Fail to spread the jam by color bombs combination.
Community content is available under CC-BY-SA unless otherwise noted.
Advertisement