Honey levels (sometimes also known as Eat the honey and save the bears levels) are one of the seven level types in Candy Crush Soda Saga, along with soda levels, frosting levels, bubble levels, chocolate levels, bubble gum levels and jam levels. Honey levels are the fifth level type introduced in the game. They first appear in episode 7, Honey Garden, with the first level being level 31.

Honey levels are the third most common level type in the game, making up 9.73% of all levels, with 728 total appearances out of the 7480 levels.

To win a honey level, the player has to free all bears in honey. Honey behaves as marmalade in Candy Crush Saga, however it can have up to six layers.

When all bears have been saved, Soda Crush is activated - striped and wrapped are made for every move remaining, granting 3,000 points each. Then each activates automatically.

Honey levels are somewhat harder than other levels. The levels are often easy if there are few colors and less Comb Honey but harder if there is too much Comb Honey, other Blockers, and many colors. 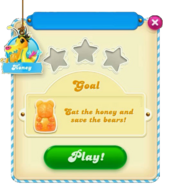