Before episode: We can all see that there's obviously only fish for one here!

After episode: It's saber tooth, not share tooth. Ya know what I'm saying? 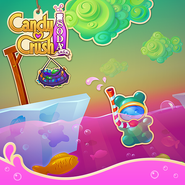