After episode: Oh, pit it! I don't have to be pear-shaped, I'm already avocado-shaped! 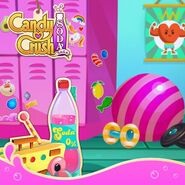