Before episode: Ka-pow! And the crowd goes wild for the Cream Team!

After episode: Gotta put your heart in it, kid! Not your face though. 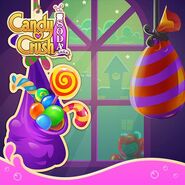