Frosting levels (sometimes also known as Find the bears levels or Frozen levels) are one of the seven level types in Candy Crush Soda Saga, along with soda levels, bubble levels, chocolate levels, honey levels, bubble gum levels and jam levels. Frosting levels are the second level type introduced in the game. They first appear in episode 2, Lollipop Meadow, with the first level being level 6.

Frosting levels are the most common level type in the game, making up 9.89% of all levels, with 740 total appearances out of the 7480 levels.

To win, the player has to find a certain number of bears by clearing certain areas of frosting that block the bears.

When all bears have been collected, Soda Crush is activated - Striped and Wrapped Candies are made for every move remaining, giving 3,000 points for each. Then each activates automatically.

A player also has to reach a certain score requirement (for one star). This is usually trivial, because if you complete the main level objective, you always have enough points for at least one star (the Bears will grant enough points for that). 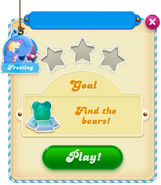 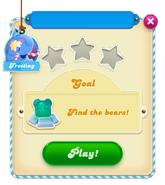