Fizz levels (also known as Soda Fizz level, Bottle Cap level or Collect the bottle caps level) were one of the level types in Candy Crush Soda Saga. This level type had been removed after Gumdrop Acres.

In this level type, the player had to match candies in the soda to make Bubbles. This had 5 different degrees. Once the fizz reached the final level status, the candy with the fifth fizz level was destroyed and subsequently upgraded one level for each candy with the same color (with the number of times it happens in a row being shown on the screen as x2, x3, etc.). If this happened six times incessantly (at which point a "x6" would appear onscreen), Bubble Rush would be activated, and the player would earn a bottle cap. All fizz on candies would disappear, and if any candies had vibrated bubbles on the board, it would detonate. However, if it happened any less than six times in a row, the count was reset.

Striped + Wrapped also removed its bubbles, because it was a giant candy that could not contain any bubbles.

When all bottle caps were collected, Soda Crush was activated - fish, striped and wrapped candies are made for every move remaining, giving 3,000 points for each. Then each of them activated themselves.

A player also had to reach a certain score requirement (for one star). This was usually trivial, because if you complete the main level objective, you always have enough points for at least one star.

Unfortunately, all fizz levels were removed from the game due to some reason.

This is a list of the original Fizz levels before King removed them from the game. Note that the "Gap" column is just for purpose of illustration.

All Fizz levels were removed on September 30, 2015, after the release of Gumdrop Acres.

To see the past fizz levels, click into one of the levels below: 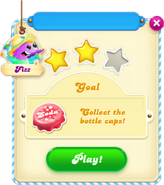 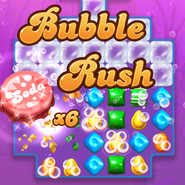