Before episode: Only SUPER hard levels are challenging for me!

After episode: Hop on now, ribbit! SLAM the salt, SQUISH the sours! 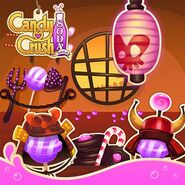