Before episode: Phew, these donuts are heavy! Are they jelly-filled?

After episode: My favorite workout music is soda pop. 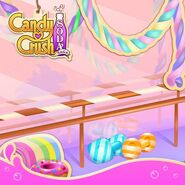