Before episode: Treasure, but no dragon!? Impossible!

After episode: Mother of all macarons! There, in the distance... My kingdom, finally! 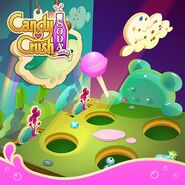