Before episode: Trooper, fighter, fisher... Child with a thousand fates..

After episode: Even the wisest owls will find themselves in a jam sometimes... 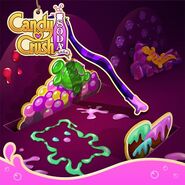