Before episode: Let me go, you metal beast! This isn't a fair fight!

After episode: I should've worn my slippery jelly cape instead... 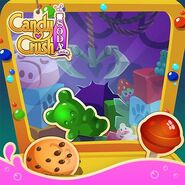