Before episode: I'd dig my way to the other side of the world to find the perfect gem for her!

After episode: This is the one! Now, to excavate my courage... 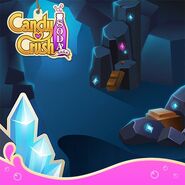