Chocolate levels are the 2nd least common level type in the game, making up 3.74% of all levels, with 280 total appearances out of the 7480 levels.

When all chocolate is removed, Soda Crush is activated - fish, striped and wrapped candies are made for every move remaining, giving 3,000 points for each. Then each of them activates themselves.

The chocolate tends to avoid special candies and will avoid eating them unless it's the only move left for the cocolate.

Life is a box of... : Can you ever get enough of chocolate? 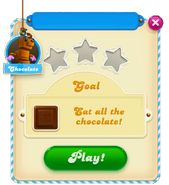