For the character, see Fish.

A candy fish is created when 4 candies (including special candies and bottles) in a square or 5 candies in the letter "P" or "Q". When formed, it gives 120 points to the player.

When candy fish is activated, it will randomly target a blocker or a regular candy and swim to it, if there are no blockers. Every candy or blocker that it destroys, it will give 3x as many points it is supposed to give. For example: 20 x 3 = 60 for candies and most blockers; 1000 x 3 = 3000 for honey bears, etc. However, no points will be given to the player if it hits an empty tile. Points from frosting bears will not be multiplied, it is not a blocker.

This fish type is created when candies are matched in green soda or the effects of special candies. They are only released when matches are made from the initial swap and they won't release during cascades. Candies colored by coloring candy or hit by fish will not create fish. Existing candy fish activated will not produce extra light green fish.

First Catch: Can you smell the fresh soda seas? What a good day for fishing!

"Get a gift and unlock a limited time event when you catch 20 fish! Fish will only be caught if you pass the level."

This activity was available after April 4, 2016. After collecting 20 candy fish, you will get a gift (the gift amount is different).

Tip: Catch fish on any level, even those you've already played.

A fish that appears in green soda

How to create a candy fish 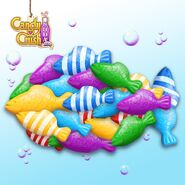 Do you enjoy fishing in the Soda Sea? 🎣 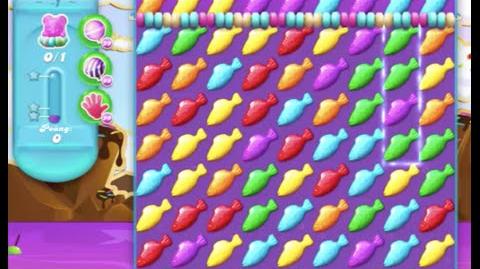 This looks like a fishy level....
Celebrate for reaching 1,000 levels!
Community content is available under CC-BY-SA unless otherwise noted.
Advertisement