Bubble levels (sometimes also known as Get the bear above the candy string levels) are one of the seven level types in Candy Crush Soda Saga, along with soda levels, frosting levels, chocolate levels, honey levels, bubble gum levels and jam levels. Bubble levels are the third level type introduced in the game. They first appear in episode 2, Lollipop Meadow, with the first level being level 9.

Bubble levels are the fourth most common level type in the game, making up 7.94% of all levels, with 594 total appearances out of the 7480 levels.

To win a bubble level, the player has to destroy bottles (just like in soda levels), to get the soda level go up. However, the main objective of the level is to get a certain number of bears (which are positioned in bubbles) above the candy string.

When the required number of bubbles are collected, if there are existing bottles on the board, they will also be popped and Soda Crush is activated - fish, striped and wrapped candies are made for every move remaining, giving 3,000 points for each. Then each of them activates themselves.

Bubble levels are generally easier than other levels. It is only easy if there are some bubbles but somewhat hard if there are many bubbles on the board. Sometimes you must switch bubbles if they locate in a stuck zone, but this can more dangerous if you put bubbles in other boards with more board levels. Levels will be easier if there are few colors or full soda but harder if there are blockers or not have soda on the board.

The candy string appears in levels with bubble bears. The goal is to get the bear past the candy string. The candy string is usually at the top of a board but it can also be on the sides of at the bottom depending on which direction the bear is floating. 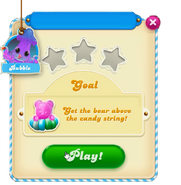