Bubble Gum levels (sometimes also known as Chew all the bubble gum levels) are one of the seven level types in Candy Crush Soda Saga, along with soda levels, frosting levels, bubble levels, chocolate levels, honey levels and jam levels. Bubble Gum levels are the sixth level type introduced in the game. They first appear in episode 13, Sugarshell Cove, with the first level being level 166.

Bubble Gum levels are the least common level type in the game, making up 3.36% of all levels, with 251 total appearances out of the 7480 levels.

To win a bubble gum level, the player has to chew all the bubble gum on the board. The objective is similar to that of chocolate levels. If a move is made in which no gum is destroyed, it spreads by one square before the player is allowed to make the next move. It can do this either by occupying an adjacent square or by adding a layer to the current square, which traps the candy on that square.

When all amount of bubble gums are chewed, Soda Crush is activated - fish, striped and wrapped candies are made for every move remaining, giving 3,000 points for each. Then each of them activates themselves.

Bubble gum levels are sometimes somewhat easier than other levels. They are harder if there is more Locked Bubble Gum, blockers and many colors on the board. 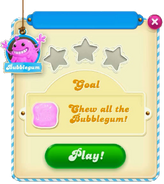 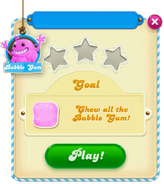 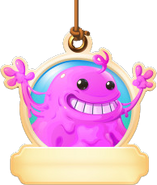