Before episode: Where am I? And why do I feel a sudden urge to shoot bubbles...

After episode: No time to mess around with magic, I have a kingdom to find! 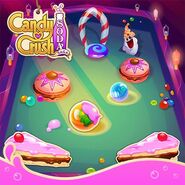